Winter is finally here in Animal Crossing: New Horizons, and that means it’s time to play the game for hours and hours in a feeble attempt to get all the new DIY recipes before the turn of the next season! From December 11 until the end of February (June 11 to the end of August, if you’re in the southern hemisphere), we’re hunting snowflakes. They’re common spawns, so if you see one floating around, pull out your bug net and catch as many as you can. You’ll need to gather a whole bunch of snowflakes to create furniture from the newly-introduced frozen series. It’s time to talk all about ACNH winter DIY recipes! Capturing snowflakes is easy enough, but how do you get recipes? One way is to create Snowboys. During winter, two snowballs will spawn on your island per day. Roll one snowball until it can’t get any bigger, and then roll the second snowball so that it’s slightly smaller than the first. Make sure you don’t smush the snowball against trees or obstacles, or else it’ll break. If you accidentally destroy a snowball, it’ll respawn later that day. When you’ve got both snowballs to just the right size, push the smaller one into the bigger one and you’ll create a Snowboy! He’ll (somehow) send a random DIY recipe right to your phone. Snowboys also give you a Large Snowflake once per day until they melt. Large Snowflakes are needed to craft some of the frozen furniture items, so be sure to talk to the Snowboy on each consecutive day.

If your island has a lot of decorations, you might not see any snowballs. They need a few tiles of blank snow to be able to spawn, so make some room and come back later. Another note is that dung beetles may spawn near a snowball, and they’re able to push them around too. They can even push snowballs into rivers, so be careful! 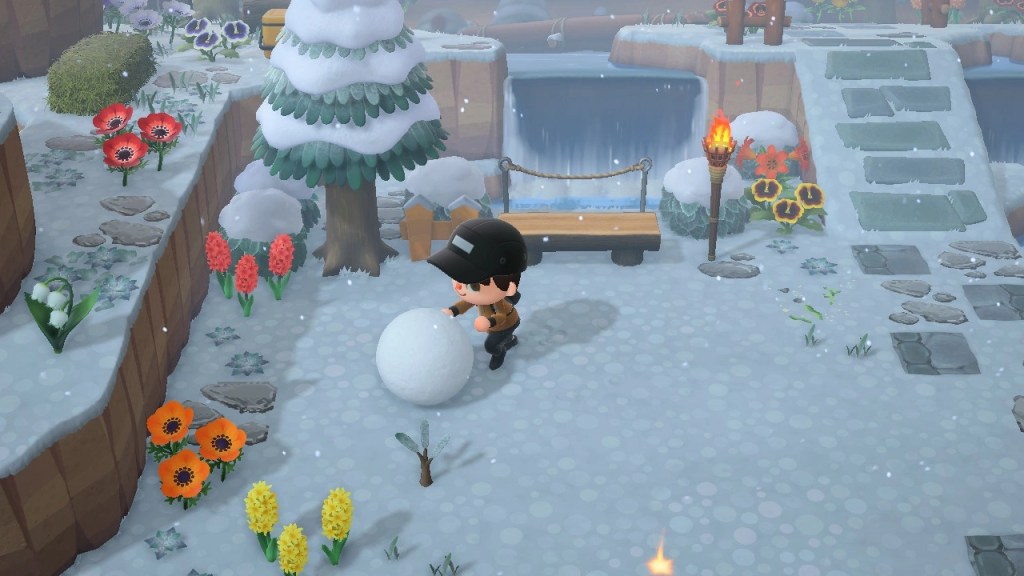 Picture unrelated, because I didn’t want to wait for a balloon to spawn. Anyway, another way to obtain frozen furniture is from balloons that spawn above your island. A balloon spawns every few minutes (at either the west or east ocean, depending on the time) and then takes another few minutes to be visible from the beach. Make sure to shoot down as many balloons as you can!

You can also wait for message bottles to spawn on the beach, and some of these may contain snowflake DIY recipes! You can also visit Nook Miles Ticket islands, which might also contain the recipes you need. Either way, there’s going to be a lot of grinding — especially if you want to find every single recipe.

You can also look at the image gallery above for pictures of each furniture item, as well as the specific items you’ll need to be able to craft them. That way you can decide if the item in question is worth the effort or not! If you’re having trouble making Snowboys or fear that you won’t be able to make enough by the time the season ends, you could always time travel — but we’ve already talked about the ethics of that. By the way, if you’re looking for a list of festive DIY recipes, you’ll want to check out this post instead. If you have any questions, please direct them to our Discord community!