That’s right, Season 4 of the Professional Amiibo League is returning! This season we will be changing things up a little bit by increasing the number of participants, providing multiple chances to qualify, increasing the prize pool, and upping the quality of the winner’s trophy by giving away the hand-painted, golden trophmiibo you see in the banner image!

Want to know how you can get in on this? Well, keep reading my friends because this is the most fun you’ll ever have in a tournament (probably).

If you already know how Pro Amiibo League works and are just looking for where to sign up, scroll to the bottom. The link is there. Last day to get your submissions in for the first qualifier for PAL will be Saturday, January 30th. However, if you don’t know how PAL works, stick around and we’ll explain it all!

Pro Amiibo League is a legacy amiibo league, where trainers fight to not only win but to just keep their slot for next season! This keeps the stakes high throughout the tournament. This isn’t a simple double-elimination! First you have to qualify to even take part! Just getting into the Pro Amiibo League is a pretty big accomplishment. Hanging onto your slot is even harder.

Each season is broken up into four phases:

This step has, obviously, already occurred.

The League is broken up into four different divisions. The divisions are named after the first four consoles Smash was available on: N64 division, Gamecube division, Wii Divion, and 3DS division. In each season, the top four in each division advance to the playoffs. The bottom for however lose their reserved slot and have to fight their way back in next season. Trainers in the bottom four slots (highlighted in gray) unfortunately lose their slots. This means, in the four divisions there were four slots lost so that opens up 16 slots. However we also have something called PAL Lite (more on that later) where the top 4 who finish in that get reserved slots into PAL the next season so there are actually only 12 slots that open each season.

HOWEVER, this season we are expanding the league from 40 players to 44 players! So that opens up an additional 4 slots than we’d normally have. Additionally, we had some trainers who had reserved slots drop out. That means this season there will be 19 open slots that you will compete to grab. How do you grab them? Glad you asked! This leads to…

In previous seasons, we only had a single double-elimination tournament to determine who got in. If there were 12 open slots, then the top 12 got in. However, this lead to situations where, if someone just got bad matchups in their first two matches, they were just unlucky and had to eat it.

This season, there will be three qualifying tournaments. This is a trial to see if we like this format as it means we will be spending more time in the qualifiers than normal. In past years I’ve been able to stream the entirety fo the Play-in Tournament but with us moving to three tournaments I may need to use the Amiibots system to get through the first few rounds. But we’ll play that by ear.

Here is how many will qualify in each tournament:

If you fail to advance in one tournament, you are allowed to update your bin file or even go with a completely different amiibo. Once you win a reserved slot though, you are locked into the amiibo you qualified with.

“So, if I don’t qualify then I’m just locked out of tournaments going forward?” Not so fast! Even if you fail to qualify for PAL you can still make it into PAL Lite. What is PAL Lite? PAL Lite is sort of PAL’s minor league’s. We use the same style and format with four different divisions. And, PAL Lite is a ton of fun because it is recorded by Supernova with all his amazing mods. Seriously, PAL Lite is some of the most fun we’ve had and is the spawning point of a ton of our memes. Being in PAL Lite isn’t a punishment, it’s an experience. Plus, if you get in the top 4 of PAL Lite, you get a reserved slot for PAL next season! Think of it a place for second chances!

But with the Play-In Tournament done it’s time for the next phase:

Everyone who qualified for PAL will get sorted into the four divisions. How we sort isn’t a set formula but we try to make sure there is a healthy spread of newcomers and characters in each division. Once you’re sorted by the Smash Sorting Hat (disclaimer, there is no such thing as a Smash Sorting Hat), it’s time to…

Everyone will play everyone else within their division. Given 11 people in each division that means everyone plays 10 games (a much more satisfying number than the 9 from before!), one against each division-mate.

That’s right. At that point it’s time for the playoffs. 16 trainers competing for the grand prize. But what is the prize you ask? Let’s see…

Additionally, the winner of PAL Lite will receive a golden Koopaling trophmiibo (also known by some as Bowser Jr, but clearly more discerning gamers call it Koopalings. That’s right Bowser Jr fans! I said it! Come at me! (PS: I’m 90% kidding… but that 10%…)).

The prize pool alone is $475 but once you factor in five trophmiibo sitting around $550 in prizes. And that doesn’t even account for shipping costs of those trophmiibo. Man, with all that, you’re probably thinking, “Man, Splice must be made of money if he can throw together a prize pool that big!”

Nope! Splice is not rich. Splice is, in fact, dirt poor! How is doing this then? Well, through a couple of different avenues. First, Season 4 of PAL has a title sponsor. Season 4 of PAL will be brought to you by daijobu.gg (by way of Leaf). Check out their line of apparel and, if you find something you like, be sure to use promocode “LEAF” to get a 20% discount!

Additionally, we are looking for a title sponsor for PAL Lite still. If you’re interested and would like to have an item of yours promoted twice per PAL Lite stream, reach out to Splice and we can talk.

The main way we are funding this however is through people buying the limited-run, Pro Amiibo League Piranha Plant amiibo! 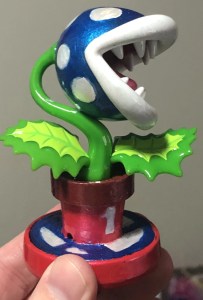 I will be making only 10 of these. Each Piranha Plant is capped off with that metallic blue paint you see at the top that is just awesome looking. Each will be individually numbered. The bottom has a cool star-design put into the base. Basically, if you buy this, it will definitely stand out of your collection for all the right reasons. We did a similar thing to fund the prize pool for GAUSS and had great success with it. Having done that project I’m excited for how these will turn out because my painting has improved. If you’re interested ask about it during my stream and I’ll let you know how you can get ahold of one.

Obviously that’s pretty expensive and not everyone can help at that price point. If you’d still like to help me cover these costs, anyone who donates $5.55 to the cause gets to pick a home stage for their amiibo to fight on, along with music to match! We had a lot of fun with this last year so I hope people enjoy it again.

With all that out of the way, let’s get to the nitty gritty, the most important details… the rules!

So, do you think you have what it takes? Or maybe you just want to have a lot of fun. Either case, click here to submit your amiibo to Professional Amiibo League Qualifier #1! Get your submission in before the end of the day on Saturday, January 30th and we’ll see you on the battlefield!